Hitting The Reset Button: Remote Engagement and Why We’re Never Going Back By Adnan Darr 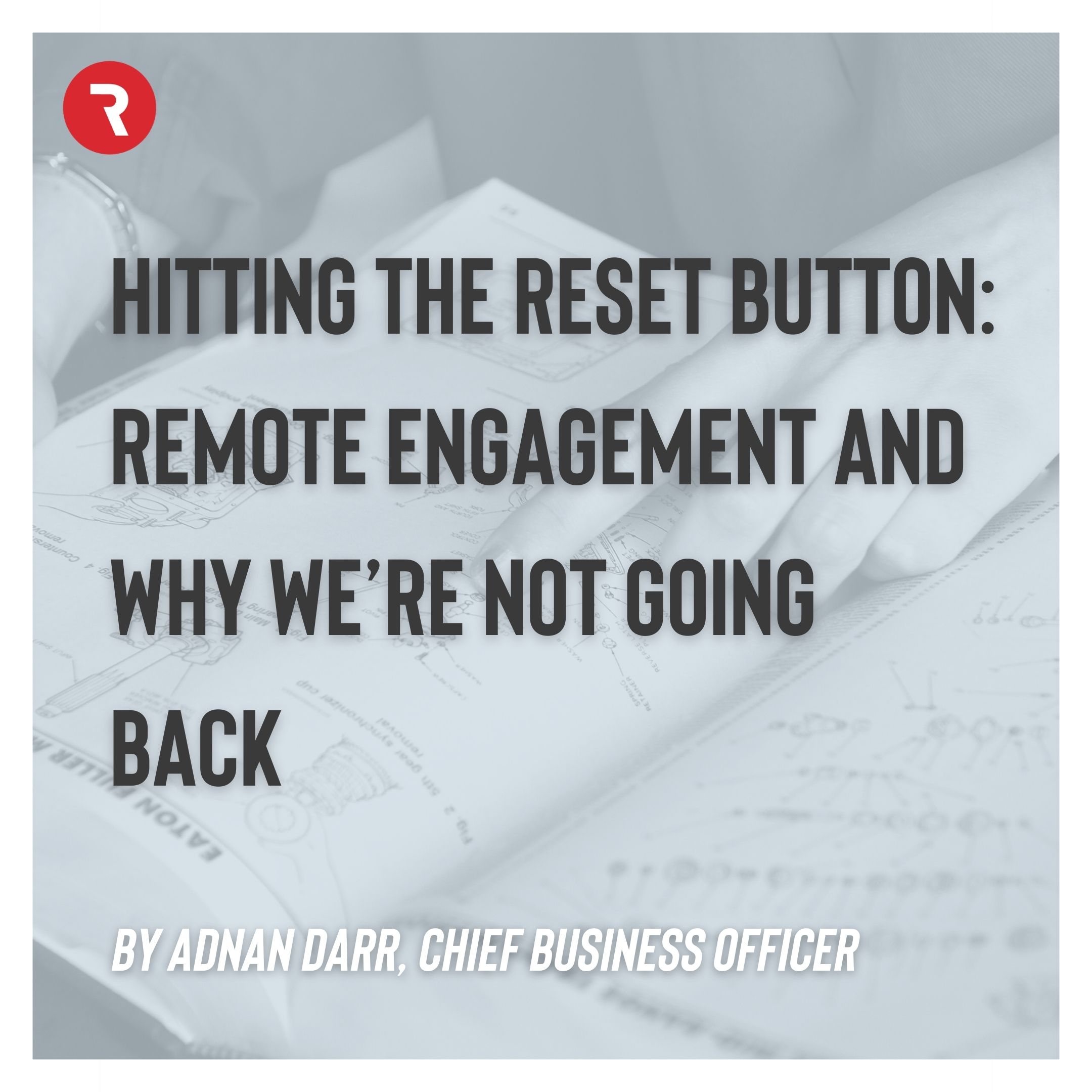 Hitting The Reset Button: Remote Engagement and Why We’re Never Going Back

To be honest, we were worried at the beginning of March. We had just come off an incredibly prosperous year and moved into our new office space the last week of February. We finally had the whole team under one roof and we were ready to keep our foot on the gas. But 2020 had other plans.

We quickly realized the pandemic wasn’t going to go away and we needed to shut down our newly opened office. It was time to become a fully remote company “until further notice” and we needed to learn how to do it on the fly. We began by starting the days with an all-hands call, primarily to make sure people were up and moving, and ended it with similar intentions at 4:30pm.

Then we started to look at it in a new way. We hit the reset button.

Rise had always done things to keep the team engaged. We covered group lunches, team outings, and did our best to foster a productive, energized and magnetic culture. What we discovered through hitting the reset button was that we weren’t allowing our people to shine on their own because they were chained to a 9-to-5 Monday through Friday schedule. By going remote, we saw our employees begin to do what they needed to do in new ways, and saw them step up to ask more questions about what they wanted to do.

Think about it – if you need a break from the screen in a busy office and tilt your head back and close your eyes for a few minutes, you’re going to have people asking if you’re okay within minutes, if not seconds. You simply cannot do it. However, if you’re at home and need that five minutes to walk around or stare at a wall, you can do it without your sanity being questioned.

With that idea of freedom to do what feels right, our twice-daily calls quickly turned into collaboration time, not oversight. Instead of working 5 days a week in the office, we effectively opened another channel of productivity. I’m not saying we’re not returning to our new HQ, but the in-office Monday through Friday 9-to-5 workweek won’t be resurrected at Rise anytime soon – if ever.

In hindsight, we clearly didn’t need to be so worried back in March about how we would continue to work together effectively. But in retrospect we were worried because we were operating according to a standard manual for office work that prevented us from thinking creatively. This manual told us what, when, who, why and how to work – and Rise, like many companies, struggled with letting go of what we considered normalcy. There is no going back to the old handbook and there shouldn’t be a “new normal” established either. A new normal suggests there is a new right way of doing things; a narrow set of protocols for how we work – and we shouldn’t be doing that. That old set of rules was what caused our original anxiety, and our new operating procedure needs to be adaptive. We had grown comfortable yet stiff. At Rise we’re establishing better ways for our team to work productively. It’s a custom mix of staying flexible and fluid, while still promoting accountability.

I’m part of an industry HR roundtable and we are seeing more and more organizations taking this approach to productivity. True motivation comes from intrinsic values and those are different for every individual. Giving everyone the space to do what they need to do for personal optimization has accelerated our progress at Rise. Days working outside the office allow people to unplug from the constant noise of an office environment. That space allows you to focus on your own work. As people grow and become leaders, there’s always going to be the struggle to balance getting your own work done and helping others. It’s nearly impossible to do both as there is a finite amount of time in the day. However, even a once-per-week reset can be the difference between burnout and total engagement.

The “figure it out” mentality is practically a requirement to be hired at a startup. However, sometimes we’re all so busy getting it done that we can’t stop long enough to find a way to do it better. This means the standard way of doing something may not be the best way. By giving people a day away from the bustling office, we’re able to maintain the engagement and allow them to find their own way to success. They’re now able to pick apart the system and improve it.

In an office environment, being physically present can be misconstrued as engagement. The question of whether or not someone is a good employee or a dedicated team member shouldn’t be determined by hours spent sitting at their desk or their attendance at happy hour. At Rise, we’re now able to focus more on the individual instead of just the group. We’re able to recognize and promote individual wants and needs. Our teams are no longer just a bunch of people chasing the same soccer ball. Instead, we’re establishing a better team of optimized individuals who are capable of coordinating and passing – doing their part to have the best chance of scoring a goal. For the team.

Today’s engagement is about the contribution of ideas and thinking in a new way. We’re getting positive feedback that employees are earning their peers’ respect for the right reasons – not just because they showed up, but because they were present. Showing up and being present aren’t the same thing, one is about being physically there while the other is all about mental engagement.

We hit the reset button while under pressure during the pandemic and we’re going to be better for it. What we’ve learned will continue to be implemented in our daily operations but we won’t be afraid to change if a better way arises. What’s the next popular protocol? The ability to pivot.

We use cookies to provide you with a relevant experience and improve our web content. By clicking “Accept”, you consent to the use of all cookies. We do not sell personal information.
Cookie Settings Accept
Manage consent

This website uses cookies to improve your experience while you navigate through the website. Out of these, the cookies that are categorized as necessary are stored on your browser as they are essential for the working of basic functionalities of the website. We also use third-party cookies that help us analyze and understand how you use this website. These cookies will be stored in your browser only with your consent. You also have the option to opt-out of these cookies. But opting out of some of these cookies may affect your browsing experience.
Necessary Always Enabled

Performance cookies are used to understand and analyze the key performance indexes of the website which helps in delivering a better user experience for the visitors.

Analytical cookies are used to understand how visitors interact with the website. These cookies help provide information on metrics the number of visitors, bounce rate, traffic source, etc.

Advertisement cookies are used to provide visitors with relevant ads and marketing campaigns. These cookies track visitors across websites and collect information to provide customized ads.

Other uncategorized cookies are those that are being analyzed and have not been classified into a category as yet.